Girls Write Now recently shared info about the Bennington College Young Writers Awards with their email subscribers. At the link, they included a number of helpful contest and publications-specific resources and opportunities for young writers, as well as a host of other writing-related resources here. I hope you find these as useful as I did!

If you’re a young writer, the parent/guardian of a writer, or an educator, I highly recommend signing up for the GWN newsletter or connecting with them here!

Welcome to 2022! I recently updated my Resources for Educators page with some exciting new contest and publication opportunities for young writers! I also added 2022 application deadlines, where available, for upcoming workshops. I’m on a brief teaching hiatus for some project deadlines, but I’ll have new workshops to share later in the year. Hope it is a good one for all of us!

Want to know more? I’ve got all the details up on their website:

The Supernatural Summer KidsWriting Workshop will focus on fostering creativity and confidence in a fun, encouraging environment over the course of four days. As we write supernatural short stories, we’ll explore key elements of genre fiction, including character, dialogue, setting, and world building. We’ll also discuss revision strategies, practice reading our work to others, and review techniques for giving and receiving feedback. Each session will include interactive presentations, story prompts, writing sprints, and opportunities to share our creative challenges and triumphs. The supernatural theme is open to interpretation through all genres, including fantasy, science fiction, mystery, fabulism, and horror.

NOTE: Please include the following information about the student taking the course in the “Notes” field at checkout: student’s name, grade level, and email address.

Don’t wait to register–previous workshops have sold out quickly!

I’m thrilled to be leading a new series of KidsWriting genre workshops at The Center for Fiction in April and May.

We had so much fun during last autumn’s horror-themed series and I’m excited to see how these talented young writers will interpret and engage with our spring themes–I expect it’ll be a blast.

These online sessions sold-out last time, so if you have any young writers (ages 9-12) in your life who might be interested, please don’t wait to register! Also, please help spread the word on Twitter (and anywhere else)!

Designed for young writers, ages 9-12, these writing workshops will focus on fostering creativity in a fun, encouraging environment. Each session examines a different slice of genre fiction and will include writing sprints, interactive discussions of story structure and common tropes, and opportunities to share and review our work. Parents are encouraged to register for individual sessions based on their child’s interests or for multiple sessions at a discount.

Saturday, April 10, 1-3pm ET
Spellcasters
Witches and warlocks, mages and sorcerers—by any name, spellcasters are magic! In this workshop we’ll be discussing fictional magic systems, spells, and tools as we write stories about the people (and creatures) who make and use magic—from the mightiest wizard to the tiniest fairy.

Saturday, April 24, 1-3pm ET
Cryptozoolapalooza
Fiction’s strangest creature club has something for everyone, from Loch Ness Monsters, yetis, and Jersey Devils to chupacabras, jackalopes, and krakens! In this workshop, we’ll explore the wide world of cryptids, craft our own pseudoscientific catalog of creatures and write stories about our fantastical creations.

Saturday, May 8, 1-3pm ET
Super Spies & Top-Secret Tech
When it comes to high-octane espionage, everyone knows that elite secret agents get all the best gadgets. In this workshop we’ll explore the thrilling world of spy stories and invent incredible technology for our secret agents to use while they try to save (or destroy) the world!

The Center for Fiction has TONS of amazing programming coming up, so be sure to check out all their events and workshops! 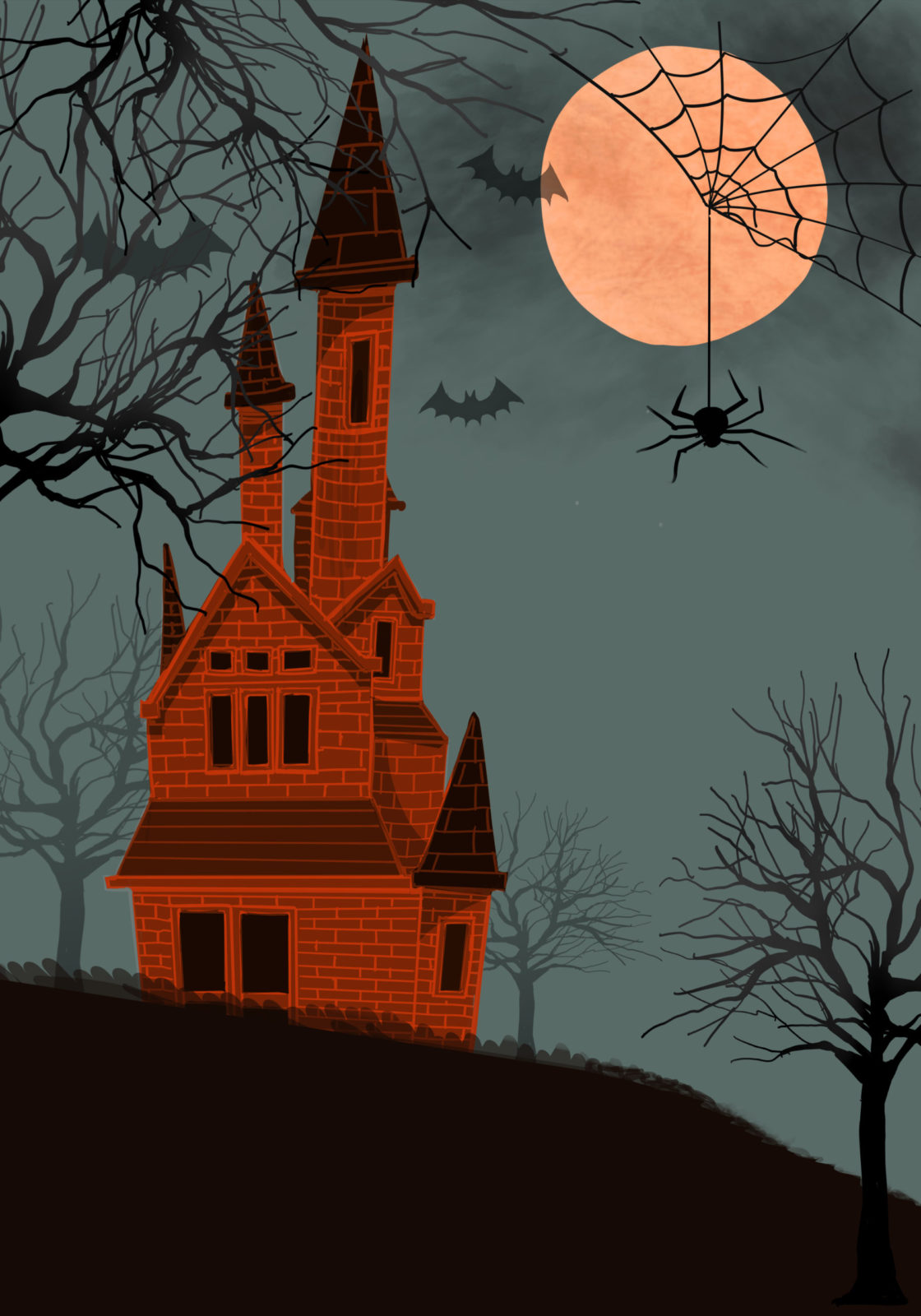 I’m thrilled to be leading a new series of horror workshops for young writers at The Center for Fiction next month, kicking off the Halloween season *AND* the CFF’s KidsWriting program!

We’re going to have a lot of fun exploring some of the genre’s most popular branches and playing around with its most infamous tropes. Halloween is my very favorite holiday and even though I know this year will be different, I’m still all-in for celebrating the spooky season, and, IMHO, this is a perfect way to do that safely and creatively.

We’ll be meeting via Zoom beginning on October 10th, with the first of three sessions (detailed below), which can be bundled or taken individually. Registration is open now, but attendance is limited, so please don’t wait.

Designed for young writers, ages 9-12, these writing workshops will focus on fostering creativity in a fun, encouraging environment. Each session breaks down a different branch of horror and will include writing sprints, interactive discussions of story structure and common tropes, and opportunities to share and review our work. Parents are encouraged to register for individual sessions based on their child’s interests or for multiple sessions at a discount.

Saturday, October 17, 11:30am – 1pm ET
Movie Monsters & Creepy Creatures
From vampires, werewolves, and zombies, to shape-shifters, ghouls, and mummies–and everything in between–in this workshop, we’ll be writing stories about the terrifying things that go bump in the night (or in your closet)!

Saturday, October 24, 11:30am – 1pm ET
Scary Science & Techie Terrors
Whether it’s extraterrestrial invasions or evil scientists, destructive blobs or sentient computers—in this workshop we’ll be writing Sci-Fi Horror about the places where science and technology meet the unknown and the unexpected.

Go Vote, Baby is out in the world and IT IS ADORABLE. Anne Passchier’s illustrations are charming and joyful, and the sliding “vote” windows are lots of fun to play with, even if you’re not a tot. I’m thrilled that Book Riot recently included Go Vote, Baby in its recent round-up of “10 Great Children’s Books About Voting and Elections.”

So, right now please do one or more of the following:
Register to vote.
Check that you are registered to vote.
Request an absentee ballot.
Help encourage others to vote. Volunteer here or here or here, or do a little googling to find other volunteer opportunities at the national level and/or for your local elections.

[Also, probably of note only to me, Go Vote, Baby is the last work-for-hire book under my real name. I’ve started using a pen name for my freelance, ghostwriting, and work-for-hire books. My reasoning: As I publish more widely in SFF and horror for adult readers, I want to be sure my work is as siloed as possible for younger readers, teachers, and librarians. Also, as I move toward publishing original children’s work, I want to clearly delineate my those publications from my work-for-hire writing. It’s probably more info than most (any?) people need to know, but I’m getting it out there now to avoid confusion later. I’ll also do a separate post about it for transparency’s sake. So hold on to your hats, I know this is thrilling stuff.]

I started working on my articles and interviews for this collection just as the world started falling apart*, and I’m so grateful I had this exact project at that exact moment in time.

Bob Ross’s show, The Joy of Painting, was something of a lifesaver for me in my tween and teen years–a bobbing little chunk of peace, positive vibes, and unconditional encouragement for me to cling to during a time in my life when all of that was in very short supply. So, in some cosmically poetic way, who better to accompany me through the early days of an apocalypse than Bob (in spirit) and some of the wonderful folks carrying on his legacy?

Since sh*t was getting real bad, real fast, most of the interviews were conducted over email, but still these incredibly kind, generous artists took time to share their creativity, inspiration, and joy with me during some of the darkest weeks I’ve ever known. For a few hours each day, I could escape the nonstop sirens, the helicopters, and the news the news the news, by immersing myself in their words and stories. It was a true gift.

I don’t think a hundred years will be long enough to process the last few months or all the things that got me through one day (or minute) to the next. But I do know that once again, Bob Ross and his life’s work offered me a true lifeline, a little bit of light in grim times–something I tried to capture and pay forward for readers.

Bob Ross: The Calm and Wisdom of the Beloved Painter is available at Amazon and other online retailers.

*If you can, please support a local food bank (find one here, here, or here) or support World Central Kitchen in their relief efforts.

This was the magical-rainbow-glitter-unicorn of assignments: one that requires I rewatch hours of a beloved television series in order to write it! (My only regret? No chance to reference one of the greatest cold opens in all of human history.)

Entertainment Weekly: The Ultimate Guide to the Office is available on Amazon and pretty much wherever you buy magazines, including in Japan, if you’re feeling wanderlusty…

Look at what I found on stands in Tokyo! I almost forgot our street date! Inside: oral histories, crossword puzzle, a chili recipe 😂 #theoffice #ew

So if you somehow missed the first run (perhaps you were busy being born! 😬) and want a taste of The Office before you make a marathon commitment; or if you simply need a break from TTDT (this, the darkest timeline) and prefer to take one by immersing yourself in some well-earned nostalgia; or if you’re ready to just bang out* a nine season rewatch and would like a handy companion guide as you do so, go on and get yourself a copy of Entertainment Weekly: The Ultimate Guide to the Office.

An exciting bit of news! As announced in Publishers Weekly and Publishers Lunch last week, my latest project with HarperCollins Children’s Books will be a super sweet interactive board book, GO VOTE, BABY! And, as mentioned in those announcements, GO VOTE, BABY! publishes in May 2020, so more updates–including cover art–coming soon…

I know I usually reserve this space for my licensed and work-for-hire projects, but it felt right to also share this bit of news from my fiction life with you over here…

I’m incredibly, ridiculously, completely-dead-and-looking-down-at-my-body-from-above excited* that my short story, “Tag, You’re It,” will be included in the forthcoming anthology, NEW SCARY STORIES TO TELL IN THE DARK.

This collection, edited by the inimitable Jonathan Maberry, will be published by HarperCollins in 2020 and is a tribute to the original series, which was (perhaps obviously) highly influential in my development as a reader and a writer.

The full list of contributors, adapted from Jonathan Maberry’s announcement:

NEW SCARY STORIES TO TELL IN THE DARK

*Also, incredibly excited to read this collection–I mean, look at this TOC–holy forking shirtballs!
**This post originally appeared on my fiction site, nrlambert.com.

Nancy R. Lambert (she/her) is a children’s author from New York City. She’s written and ghostwritten more than 50 books for kids and teens and her work is included in the new middle grade anthology, Don’t Turn Out the Lights: A Tribute to Alvin Schwartz’s Scary Stories to Tell in the Dark (HarperCollins, 2020). She’s also written for Entertainment Weekly, TIME, LIFE, and Tor.com. She was a 2019 U.S. National Park Service Artist-in-Residence at Fire Island National Seashore. In addition to her work as a pop culture author and freelance copywriter, she volunteers with Read Ahead and 826NYC.