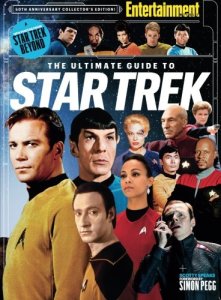 Super excited to have written two pieces and a list (I think the young people call it a “listicle”) for this special edition of Entertainment Weekly, Entertainment Weekly: The Ultimate Guide to Star Trek. My favorite of the three pieces–if I had to pick–is “Who’s Your Captain,” in which I rank captains based on who would make the best wingman (or woman), road trip buddy, life partner, etc. Any job that requires you to re-watch your favorite Star Trek episodes is a fairly wondrous thing. So I reeeeeally enjoyed researching and writing these pieces, as well as being a small part of the bigger 50th anniversary celebration.

I could write for weeks about how Star Trek was ahead of its time in so many important ways. But other deadlines loom. So instead, I’ll leave you with this quote, often attributed to  Gene Roddenberry. I couldn’t find a solid source for this one, but thought it was an appropriate sentiment for this horrific week and very in-line with Star Trek‘s remarkable legacy.

“Star Trek was an attempt to say that humanity will reach maturity and wisdom on the day that it begins not just to tolerate, but take a special delight in differences in ideas and differences in life forms. […] If we cannot learn to actually enjoy those small differences, to take a positive delight in those small differences between our own kind, here on this planet, then we do not deserve to go out into space and meet the diversity that is almost certainly out there.”
― Gene Roddenberry, (maybe)

Entertainment Weekly: The Ultimate Guide to Star Trek is available at magazine stands, in bookstores, and online.

4 thoughts on “On Stands Now! Entertainment Weekly: The Ultimate Guide to Star Trek”

Nancy R. Lambert (she/her) is a children’s author from New York City. She’s written and ghostwritten more than 50 books for kids and teens and her work is included in the new middle grade anthology, Don’t Turn Out the Lights: A Tribute to Alvin Schwartz’s Scary Stories to Tell in the Dark (HarperCollins, 2020). She’s also written for Entertainment Weekly, TIME, LIFE, and Tor.com. She was a 2019 U.S. National Park Service Artist-in-Residence at Fire Island National Seashore. In addition to her work as a pop culture author and freelance copywriter, she volunteers with Read Ahead and 826NYC.